Internals were the next thing next to exams that troubled students a lot, in fact, every month. Students trying hard to get average marks was a big deal that time. I remember we had something called blue books in which we were supposed to give our tests and the same book would be used every month. Some of our classmates who stayed in hostel would leave the book empty and then at night they would collect the books from a attender and fill in the answers. Of course, they bribed the attender the same and I know this was not right what they were doing but there was no way to stop it either.

Looking the syllabus and portion and analysing what to study and what to skip became a routine during internals. Here, students did not attempt to score high marks but just the average because most of them were confident of getting good marks in the external exams. Everyone sat in groups and discussed what would be important topic and just read that. We tried to analyse how the professor is and how he will set the paper. At the end of internals, everyone would even try to be nice to lecturers thinking that would fetch some good marks which was never the case though.

The only best thing about internals were, it would just be for about 1 hour and the rest of the day was free so we did not have to attend any classes.

A beautiful sunset captured on our last trip. It is always very pleasant and soothing to view the sunset or the sunrise. 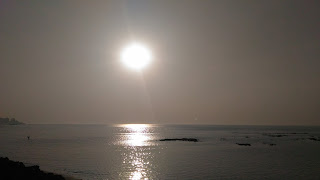